Shipwrecks and Wood (and some Bois Naufrage)

I come from a land where you are never more than 6 miles from freshwater, where coastline is never more than two hours away, where it takes more than a day to drive the coast of just one peninsula.

Sandy beaches and shipwrecks abound, and yes, Virginia, the lakes are really that large.  I mean, think about it; the Edmund Fitzgerald was 729 feet long, and weighed 13, 632 tons.  That, as we were taught in school, is a foot short of two (American) football fields.  Not very shy of two soccer pitches.  You can get to center field in a MLB park and add a Little League park besides.  In terms of weight, that's 4,993 Cadillac Escalades (5467lb=2.73US short tons).  Five thousand Escalades, lost; two football fields, consumed.

The Edmund Fitzgerald is but one of close to 5,000 documented shipwrecks in the Great Lakes.  In fact, the United States maintains an underwater sanctuary in Thunder Bay, just off Alpena, Michigan in Lake Huron.  NOAA maintains fourteen of these sanctuaries in the U.S. and its territories; the Thunder Bay site is entirely underwater, protects over 200 shipwrecks, and is the only sanctuary to be found between the coasts.  You can bring your scuba gear and check it out.

Yes, Virginia, the lakes are that big.

I bring this up today because Parfumerie Generale's Bois Naufrage is reported to be inspired by a Lucien Clergue photograph, "The Nude on Flotsam."  B&W, emphasis on graphic lines, texture, you know the drill.  It's the naked skin on driftwood that is supposed to be the thing.

Bare skin?  Driftwood?  Water?  Sun?  Um, yup, this I know something about.

If you do, too, you can skip the rest if you hear me say "a surprisingly dry day at the beach, and somebody in the vicinity is testing coconut on their s'mores."

No?  Okay, here's where Bois Naufrage situates itself for me.

First, it goes on dry.  This wood has been in the sun a long time, but has not yet warmed up much today. I might be inclined to say it opens dry-alde-figgy, hint o' sugar.  The aldehyde-like-ness comes from being high up in the nose and rather airy, but no bubbles.  Something holds it aloft.  It then pretty quickly goes through its paces--the dry dries off (oooh, now THAT's a drydown!), passes through a kind of recognizable semi-sweet PG skin scentness.  Which is where I am both happy and disappointed, because I can't help but be pleased by that cozy thing Guillame does so well, yet I'd rather be played with and taken to a stage three, given the odd but interesting opening.  But nothing for me.  Lee over at the Perfume Posse got something sea salty right around this point, which intellectually sounds like a good thing to happen.  By then, my skin seems to have eaten it.  I'm afraid to spray too much in an effort to get there, because that opening threatens to trigger an alde-style induced headache if I'm not careful.

Retention for this Bois Naufrage?  Lake Huron, in the shallows. Develops, abandons ship.  I almost put it in Lake Ontario, but a generous spritzing keeps it around for almost two hours. 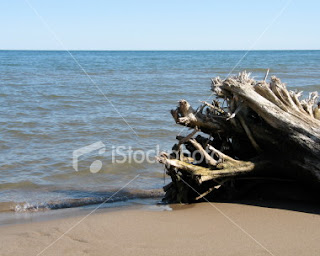 go ahead, imagine your Hawaiian Tropic oiled body was here...or spray on that Bois Naufrage...
this is driftwood somewhere on Lake Huron's shore


Or, try these books:
Great Lakes Shipwrecks and Survivals
The Living Great Lakes

Whoops...perfume disclosure...I have a small decant from a perfume fiend, er, friend's bottle.
Posted by ScentScelf at 8:45 AM

well it sounds like it should be exactly my kind of thing but perhaps doesn't develop or stay as long as we might like. Still I love salty, sea, drift woody scents more than just about anything else.