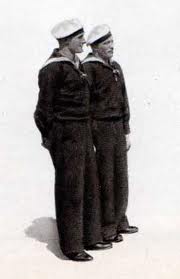 Today the local newspaper featured a story on local veterans, including some who had served with the Merchant Marine.

Immediately, I remembered old movies and toss off lines in conversation about being sent to serve in the Merchant Marines.  And realized I knew precious little about these mariners, other than some mangled impression that being sent to serve was akin to being in the Foreign Legion, but with water, rather than sand, under your feet.

Here are a few corrections to my imperceptions:
*Rather than foreigners choosing to serve in another country's armed forces (the Foreign Legion), the Merchant Marine is composed of citizens of their country.
*The Foreign Legion has an elite reputation, and is not Abbot and Costello bumbling through the desert
*The Merchant Marine is not composed of U.S. Marines on punitive duty, but seafaring folk who come to the aid of their country...without the artillery of a fighting ship.

Of course, just about every day of every year, I find myself reminded of that which I don't know.

Today I take that reminder in more somber form.  Because something I will never know, no matter how much I recognize what I don't know, is what it is like to give your life in service of country.  Or spend your days serving, knowing that you might cross the bar before the day is done. 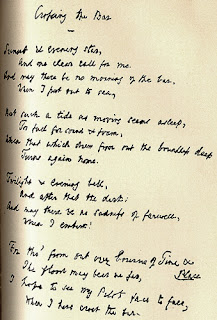 photo from the Gjenvick-Gjønvik Archives, an online source of things marine from 1800s-1954, including information and documents from the two World Wars, the WPA...and groups working the inland seas.


manuscript copy of Tennyson's "Crossing the Bar" from the University of South Carolina rare books and special collections section of their Libraries site.
Posted by ScentScelf at 9:40 AM 7 comments:

Syntax is key, but it is not written in stone.

When you transition from one phonemic language to another, when you go from one pot of words-to-sentences to collections thereof which make thought clouds to another pot using the same constructs, it helps to remember that the conventions of assembly can vary.

It's the same in music and poetry.  There are structures you are familiar with -- the verse, chorus, verse, chorus, bridge, chorus of a popular song.  The rhyme and rhythm of a limerick.  The syllable per line allotment of a haiku.

In perfume, you fall down the rabbit hole and learn about the opening, the development, the drydown.  You get excited when you start to recognize these these things, and appreciate when certain perfumes perform their acts well, whether because of the composition of each, of the transitions, or the new notes they hit which end up having the effect of tickling your fancy.

Then, perhaps, you get used to this structure, this particular form of the language, and get accustomed to communicating in it.  So when another Romance language comes along, you might recognize the phonemes, the fact that something is being communicated...in fact, the language might be analagous enough to your own that you can identify cognates and comprehend in some sort of pidgin listening way.

But no matter how much you are catching on, there comes a point when, at least for a little bit, it's best to shake off your "knowledge" and just listen with fresh ears and clean slate.

You might find that, in the end, combining the two approaches leads to your best understanding of what was being said.

***
A few weeks ago, I applied to be a "tester" of a flight of perfumes offered by Essentially Me.  Lo and behold, an e-mail arrived from "Alec and Sian" letting me know I would be sent a sample set.  "Alec" I am presuming to be Alec Lawless, a perfumer who has written about the subject.  I had a certain set of backdoor information about Lawless and the Essentially Me operation, because I troll the blogs (and therefore had read Helg's review of the book) and had come across a piece on Lawless consulting to a BBC show.

The perfumes themselves weren't really on my radar.  For one thing, Essentially Me is based in the U.K., and my explorations with independent perfumers admittedly started either with Big Names (ah, those days when The Different Company seemed like a radical independent) or locals (and I remain a fan of folks like Liz Zorn, Laurie Erikson, and Ayala Sender, even as I still need to get to know more of offerings from Dawn Spenser Hurwitz and Mandy Aftel).  Add in one more adjective differentiator to indpendent, the "natural" perfumer, and the list gets even shorter.  I have played in the sandbox with Roxanne Villa and Anya McCoy, and a little bit with Abdes Salaam.

It's an interesting business, this, the natural perfume thing.  I've avoided writing about it, because I have felt I haven't been able to fully put my hands around it.  Including the fact that I was trying to figure out just how I felt about something I knew should be discussed with perfume, as perfume, but perhaps not as "Perfume."

A language and sorting thing.

Because, at a certain point, the naturals play differently.  That is neither good nor bad; it is what it is.  But when I fell into perfume, I had a past as a person who went through an aromatherapy zone.  I learned essential oil notes and applications, dangers, ways of blending, etcetera, and employed essentially oils for pleasure and practical purposes.  (Homemade house cleaners, anyone?  Potions to make boogey men afraid to enter bedrooms? Clearing of the sinuses? Calming of anxious nerves? Elimination of foot fungus? Oh, that and more.)  So I suppose, in a way, the fact that the way the notes were brought together (their aural presence, in a music metaphor), and the fact that their presenting structure was different (from the short story of aromatherapy to the elegiac sonnets of a Perfume, perhaps?), allowed me to leap languages and not pay much attention to the previous experience.

When I explored natural perfumes, I often found an extra sort of noise entering my processing.  Because I was recognizing specific notes and "accords" and associating them with the previous hierarchy (antibacterial? antiinflammatory? good for burns? dermal irritant?), and, they were, like, totally getting in the way of me sitting down with a perfume, dude.

So if a natural didn't at least follow the sonnet structure, I set it aside.  Because I was playing Perfume, and needed the participants to at least know when to insert verse, and when to jump to the chorus.

**
My experience with reviewing the Essentially Me flight reflects a transition.  Or perhaps an assimilation. Part of it is the perfumes themselves; they clearly have a form, they transition, they have different acts.  Part of it is me; I've been playing Perfume long enough that I can insert a little sitar into my Brit pop, a raga structure into my Coltrane chorus, without getting lost.  I'm going to post my reviews next, but I thought it was important to set out the context in which I experienced them.  For me, at least.

image from the Poem Shape blog
Posted by ScentScelf at 9:09 AM 4 comments: