The time has come. 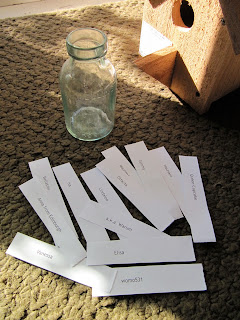 As is my wont, I avoided the electronic choosing system.  This time, instead of putting paper into a vessel and using the magic toaster tongs, I went for a message in a bottle kind of thing.

Note that the names were printed and cut into strips all of the same dimension.

Then each strip was folded in half three times, and placed into the jar. 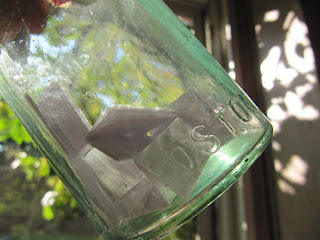 Much shaking commenced.
Of the jar, as in a martini, not self, as in a tizzy. 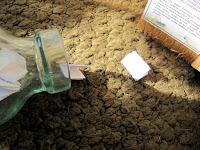 One tri-folded piece exited the mouth first, with another chasing close behind.

The first out was called the winner. 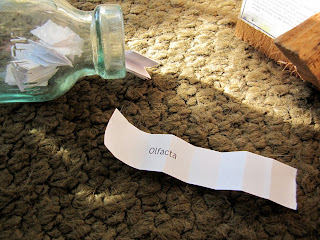 
But wait.  This seems so...so random.  And I was so late in shaking.  So, I opened up the second out of the gate.  Because I'll send what remains of my sample to that person. 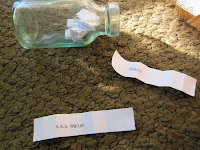 Womo, if you want half a hit, contact me via the link!  (ScentScelf@aol.com)  Olfacta, contact me with your mailing info, and I will pass it along to Dawn, who will be sending you a fresh sample directly.

Congratulations both of you.
The rest of you, if it's any consolation, now I need a hit, too.  :)

Email ThisBlogThis!Share to TwitterShare to FacebookShare to Pinterest
Labels: draw results, i wish i could give one to each of you, Pandora, random, sampling
Newer Posts Older Posts Home
Subscribe to: Posts (Atom)