(Thanks to pirate bits like that, th' tongue can be shared across th' Seven Seas...what ye lads and lassies yell te be "intarnashn'l.")

(That thar be a bucko emoticon, if yer fixin' to savvy.)

Also today, perhaps and perhaps not, the anniversary of the creation of the emoticon.  Wired is running a "This Day in Tech" bit about the purported perpetrator of perplexing symbolage, Scott Fahlman.  However, the story of the attempt to concoct symbolry to clarify text communications gets immediately murky, for as Wired points out, typesetters have been pressing (HA!) type-based non-verbal communication upon us for many moons before that.

Oddly, I myself had a bit of an emotical dust-up with the OAITH (Other Adult in the House), when he perceived that a virtual missive I sent came with barbed tongue, rather than gentle greeting.  Why?

Apparently, geeks have used this archly, to convey, well, an edgyness, rather than the placid contentment I was trying to convey.

The scallywag was ready to hop aboard the Man-O-War and make sharkbait o' me.

Fortunately, all was cleared up before he blew the messenger down.  But Blimey! who knew I had stepped into a bilge-sucking morass of hempen halter code.

So, I've been thinking on these two things today, Local Talk Like a Pirate But Watch Yer Emoticons Day.

And then of course, fixed it upon myself to link it all to perfume.

What perfumes have the potential to flub the message between perfume-lubbers?  Or even perfume lovers, for that matter?

I for one hold Chanel No. 19 aloft.  You know, Luca Turin's wire-hanger mother?  The one folks refer to as "cold" and "distance keeping"?  I mean, okay, the galbanum is bracing, but people, there is green flower in there.  I don't wear it as a "buzz off" kind of fragrance; I wear it in the same manner I might pick a pair of Italian shoe boots for the day.  They are both beautiful, have clean lines, and support me when I need to attend to business, but don't quite cross over into bee-yotch territory.

Not to me, at least.

Here, here's another one:  Serge Lutens Musc Kublai Khan.  You know what that says to me?  It says "me and my men have just been out riding on horses and camels for a few days with no shower in sight and we might have rolled in something along the way and we're just going to plonk down next to you here and if you don't like it you better run FAST because we're already enveloping you and if you don't faint you might retch."  You know what I've heard someone else say about it?  "MMMMmmmm, cozy."

Is what we have here a failure to communicate?  In this case, I don't think so; I think here it is simply different languages.  Like, say, German and Chinese.  Phonemes and graphemes.  You say potato, I say rubber stamp.  Because I think we are not even experiencing the same thing, let alone deciding what that something means.  So let me take this moment to clarify what I am trying to find in terms of examples of perfume mis-communication:  We both agree it is a smiley face.  I mean, say, a lily of the valley.  But what does lily of the valley signify?

Speaking of lily of the valley, let's hop to that gem of a note for the moment.  Have you noticed folks waxing nostalgic about, say, Diorissimo?  It is a lovely creation.  I can acknowledge that a) it smells like lily of the valley, and b) it is pretty.  But from there, you and I might diverge.  Because, truth be told (here I go into a Very Quiet Voice, so as not to offend), it is this|close to being, well...simpering.  Blow me down if one of my fiercest friends, she who dons Mitsouko like a cutlass and Femme like a come hither va-voom dress, says it makes her feel pretty.  Me?  I feel like...oh, I don't know, Nellie Olsen, stripped of sass, left with nothing but banana curls and a very clean pinafore.

Hey, speaking of Femme...let's talk cumin for a moment.  There's a note that I frequently find myself nodding along with the crowd when we determine whether or not it is present.  But then...what does it mean, to have it there?  To me, it's generally B.O. or panties, which trust me, in my world does not mean "come hither."  It means hither was reached 3-5 hours ago.  But wait, that's not how I *receive* a message, that's how I interpret what is sent.  Hmmm.

Here.  How about Big Flower Bombs, and/or Big White Florals.  Like...let's go classic here...Fracas.  What does that say to you?  Sexy bombshell coming through?  Or Tennessee Williams character who is slightly unaware of being past prime?  Undulating vixen?  Or flat footed floozy with floy, floy? 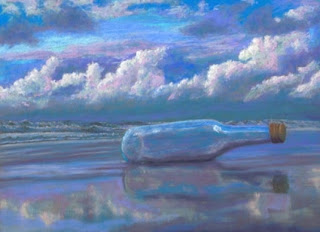 It's a problem that has been posed before:  for whom is our message in the bottle?  Sender, or receiver?  Directly connected of course to the question "do you wear perfume for yourself, or for others"?

All I know is, there are times when folks have described what message a particular scent conveys, and my head tilts to the side.  ("Are you talkin' to ME?")  But I know that unless they ARE talking to me, there's room for different translations.

However, if we are trying to talk to each other, it would probably be best if we made sure our lingua franca was all simpatico.

image of Anne Bonny taken from Hanging Cup Pictures,
also found at the delightful Geography All The Way
engraving apparently by the peripatetic "anonymous"

Posted by ScentScelf at 1:04 PM

This is an hysterical (a hysterical?) post! Watch yer emoticons! Love it!

Fracas is NEVER 'past prime' - I know what you mean when you say that - but it ain't that. Ever. It's too scary for that. Now Femme, worn incorrectly (read: too much/ with the wrong clothes/ at a full moon).....there's no emoticon for that one, alas...

Defending that Fracas to the end, eh? ;)

I do understand your meaning, of course, as you clarify how Femme and Fracas "speak" to you. Let's say it's a case of message received and noted. :)

Yeah, go ahead and tell about that Diorissimo. I've resigned myself to knowing that I'll never be a lover, just an occasional admirer. Out it will come for the annual ritual, then tucked back in until the next time.

Love the notion of someone wearing Mitsouko like a cutlass! Piratical theme most cleverly interwoven...

And yes, I think we need way more smiley faces: I use the regular happy/placid contentment one, a winking semi-colonic one for mischievous remarks, and one I came up with - or was it lovethescents? - to denote irony that goes beyond regular mischief.

But they are still not nuanced enough, me hearties.

It is so far past my bedtime I am not so much walking the plank as wearing them in both eyes.

Ah ha ha!!! The long pause I took at "semi-colonic"...the repeated parsing it took for me to firmly set my mind to punctuation and not partial "cleansing"....

But that is me, opening with a case of flibbertigibbet. I do think there should be a full emotical range of symbol, with attendant training on cross-cultural meaning. Perhaps things will emerge with usuage...or perhaps the greater ease with which we can insert photographic and video image into our missive will render emoticons a funny footnote in history.

Speaking of footnotes in history...I do hope you DID end up getting forty winks for them planky eyes. You've been quite the traveller, you. Rest would be more than appropriate.

Glad you have you here, mind you. Arrrrrr.

Hah, you took a long pause at "semi-colonic" and I took an even longer one at Nellie being stripped of her ass!

I woke up one day a few weeks ago and no longer got B.O. from cumin. It's now warm and cuddly to me. I am not sure how that even happened, as I can't stand the taste or smell of the actual spice and have always been a cumin-phobe in perfume, too.

And now I feel like I better try some of that MKK I have heard so much about.

But La Musette can keep her Fracas. :)

Ah, Tammy -- I have found the comment my e-mail suggested was delivered!

And a hearty belly laugh at Nellie. :)

So you've crossed over to cumin, have you? I have one notable bridge to the body cumin, and that is FMK Absolue pour le Soir. Accidentally...okay, no; lazily...found myself waiting through the incredibly potent open, and then found myself happily settling into the dense love potion that came next. Love, as in I loved it, I love my arm that it was affixed to, I loved being "trapped" with it, I didn't move and stayed with blanket and book in that corner of the couch for the rest of the evening.


Do report back when you sidle up to that MKK. I still get neck-lash when I find it on someone else's skin. Have not been bold enough to try it on mine. Musc Ravageur, OTOH, I can do sometimes.

Yes, Musette can keep her Fracas. And I think she is quite happy doing so. :)