When I started this blog, I was teaching full-time, an occasional musician, and running a small non-profit arts organization.  I had been nearly two years into a peculiar perfume near-obsession that I had revealed only online as a commenter visiting perfume blogs.  Past incarnations included being an independent filmmaker, a documentary producer, a human resources professional, and journalist.

Introduce becoming a parent about fifteen years ago, and liberally shake throughout.

I was very reluctant to discuss any of that when I began writing here, as I was enamored of the idea of being an Everyman falling into a new passion.  As an "Everyman," I tried to document and explore that process as anonymously as possible. Because I was, as most of us are, reasonably good at some things, spectacularly bad at others, and figuring out the rest, it seemed like any other personal details just got in the way.

Incarnations change.  I am now freelance, and have revealed some identifying factors (the music, the film, the teaching, the parenting) in the course of my writing.  The intrigue and attraction of being an International Blogger of Mystery has been compromised.  Hence, this "about" page.

(To be sure, "international" was never in question, as my passion for freshwater and Great Lakes location were always up front.)

Why I blog, though, still grows from the initial motivations.  "Learning and understanding thrive on metaphor," I told students, parents, and fellow educators.  The idea that deep understanding is when you go beyond fact memorization, step past replicating processes, and come up with original applications and/or the ability to translate from one realm to another...THAT was the goal we had set for educating our students.

That, and writing plenty, to explore and practice.

I realized that it was a while since I had put my money where my mouth was, so to speak.  So, instead of just handing out assignments, I gave one to myself.  I needed to write, and I needed to practice exploring new connections.

Filling in the second blank has largely defined the journey.  Not relying entirely upon perfume as the catalyst has become part of the landscape.  Always being curious, constantly poking at how things work, and being willing to be publicly wrong have been constants throughout.  Sometimes I take my time, sometimes I dabble, sometimes I'm just silly.

In recent months, I have tried to incorporate my visual self more and more into the blog.  If you've been along for a while, you'll notice the pictures have become mostly my own.  It's not that I'm trying to skirt copyright issues; it's that I decided I need to amend the challenge.

I am grateful for every person who stops by, and relish those who choose to hang out and chat. 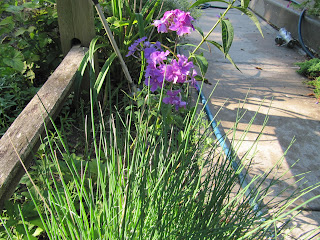 With your indulgence, however, I remain ScentScelf.  A little mystery never hurts.