I started my day by sweeping.  Outside.  An activity which here in America was often depicted as the bailiwick of immigrant women who had trouble speaking English and a penchant for wearing housecoats all day.

There is a threat of rain, and I figured it would be a good idea to gather me maple buds while I may, before they were all washed toward the patio drain, leading to a clog and the creation of a sort of wading pool inhabited by metal furniture and a firepit.

I also enjoy being outside.  It is spring, for realz.  A chance to breathe fresh air, listen to the birds, redirect the energies I would rather be putting into the garden (it is still EARLY spring around here).  And, quite frankly, a chance to avoid sitting syndrome, a malady to which I fear I have become quite prone in this the most recent act of my life. 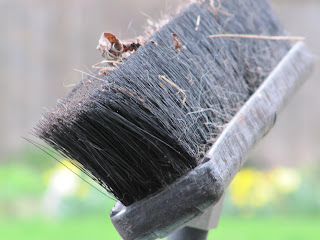 And I came up with an idea for a post.


***
Why Field Notes From Paris this morning?  Because a friend sent it to me, as an expression of something she thought I might like.  Which made me eyeball Field Notes in a different light.  "Ah, creature; someone else knows you, and based on what we've gleaned of each other's nose preferences, thinks I would, too.  Hmmm."  Now I had stereoscopic vision:  in the one frame, an assembly of my previous impressions, which were a mix of yes no intrigued ultimately not worth a full bottle.  In the other frame, a swirling of potential reasons why the matchmaking review set me up on a date with this one.

I swept.  I sniffed the Ineke on my wrist.  I thought about activities that don't bring us information or data to process, "simple tasks."  The kind of thing that in years past I might have done to music.  Aha!  To music!  Could I be providing my mind with background noise, a low demand but still processable track to attend to while gathering ground bits from various locations and assembling them in one area?  Was "listening to" a scent akin to listening to...a symphony?  a pop tune?  a concerto?  Perdido, as performed at the Newport Jazz Festival?  Perdido, as performed to meet the time constraints of a recording?  Was it right to limit it to one tune?  But it had to be, right, because one perfume was but one presentation, even if it had multiple acts in its development?  Is a symphony to easy, too snooty an approach to thinking of multiple acts?  Maybe a mix tape is more appropriate?

The answer, of course, was "all of the above."  Depending on the scent.

What I had on my wrist was Ineke Field Notes in Paris.

Instead of making a musical connection, my brain headed to the language of 'fume.  And not in a thoughtful way, either.  "Masculine," said the voice in my head.  Sssssht.  Sssssht.  SHHWIPSH.

Well, drat.  So much for deep insight.  But, yeah, once I process the gentle tobacco that first hits me, the whole thing seems rather...linear.  Pleasant, mind you.  But linear.  Like sitting alongside a channel to have a beverage in a tight space.  The view is pleasant enough, and you are enjoying yourself.  Your eyes feel happy.  But you are essentially drinking one thing, and you cannot adjust the parameters of your sliver of a view.  With the exception of the occasional glint of light (something does sparkle in FNFP every now and then--citrus?--and occasionally something else flits by), what you have is...that.

*
Later, after I came inside, and grabbed my camera so I could grab a picture to illustrate the post, and ran for the phone which was ringing, and reintroduced a little noise to my meditation, I heard the word "masculine" cross my brain again.  And I thought "Aha!  Caron masculine...yes!  Third Man!!"  And made note of the moment so I would write about it, and ran to gather my decant bottle of 3º Homme that another friend sent me back at the start of my descent, spritzed the opposite wrist the the nominative* masculine, and came back to my computer.  With relief, I realized I am not crazy.  They are not the same, this Field Notes and this Man Who Came After One and Two, but they both smoke.  They both roll in a flower.  The both don't play out so much as sit with you, but in a playful mood.

They do kinda smell the same, in other words, and in the same way.  The Caron is sweeter.  I'd pick Ineke for warmer weather, if choosing between the two, because the Caron sweetness might be to cloying in heat and humidity. 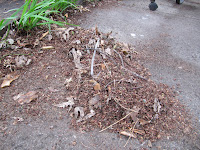 ~~
As you can see, I've gone from empty mind to busy brain all of a morning, and we're not halfway to noon yet.  But I needed that time with the broom as much as I relished the firings of the brain as it sought new ways to say "this reminds me of...".

Which, in the way of a sweeping generalization that says "these scents are masculines," is a metaphorically generalizing way of saying "Sorry I've been gone, but I needed that."

Too much input.  Too much sitput.

Not that anything is fixed.  But I think I've figured out a way to navigate the rhythms of the current set of stuff.

The nice thing about the Ineke is that it reflects that idea of stasis and change all at once.  Modestly. 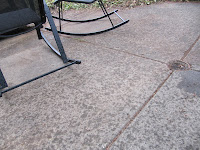 Very modestly.  But there.

Ssssswwwwipppfffh.
Posted by ScentScelf at 10:15 AM 8 comments: